I try to keep my posts to under 600 words, for the most part, but it’s been 3 weeks since I last published, and I’ve got one hell of story to tell. So grab some coffee (since I can’t) and kick up your feet. Special credit to theawkwardyeti.com for the brilliantly twisted cartoons included here. They are funny. And perfect. My last 2 weeks, decidedly not so.

I didn’t count on collapsing into a crumpled ball of pain half hour after the movers left.

When that pain refused to budge some 18 hours later, I broke down and saw a doctor. He listened intently to my symptoms and immediately sent me to have some extensive blood work, a chest x-ray and an EKG done. 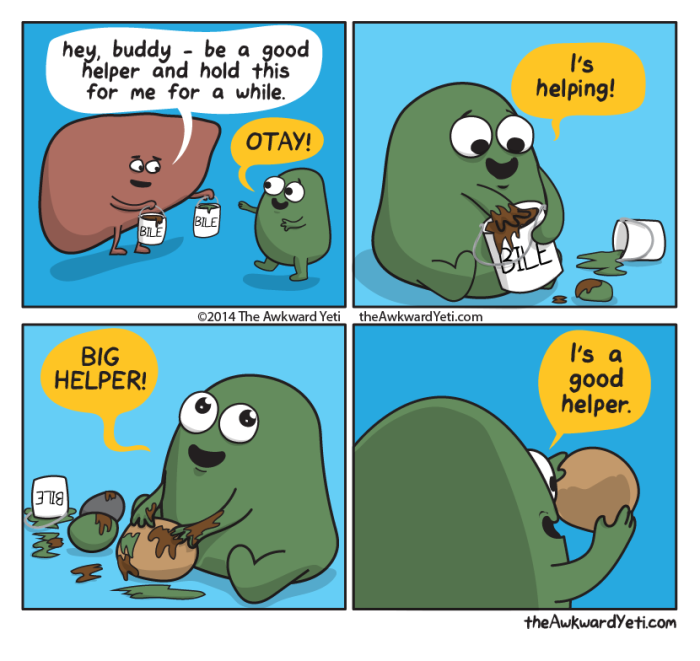 Wednesday was a blur. A blur of pain.

By Thursday I had developed an all-over itch. Every surface of my skin demanded to be scratched. Nay, hacked at.

I took my blood pressure at home. It registered 175/120, so I hightailed it back to the doctor.

He had just received the results from my blood work, and calmly asked if I had driven myself there. I replied that no, my husband had driven me. He demanded I go get him so that he could explain things to him. This confused me, as I wasn’t aware of any deficiency in my hearing or brain function, but I humored him and called Mr. Enthusiasm in.

He told us he could call an ambulance to take me to the hospital. My husband blanched and asked if that was necessary. I can drive her, he said.

Apparently my lab results were quite alarming. My liver function was compromised. And he explained the crazy itchiness: my bilirubin count was 25X higher than that of a healthy person. He told me that this likely meant that a stone had traveled out of my gallbladder and become blocked in my bile duct.

This is where things get nasty. Essentially the bile produced by my body through normal digestive function was hitting this roadblock and “back-washing” into my blood stream. The itchiness was my body telling me I had poison coursing through my veins. Lovely.

Another EKG. [Seriously, I’m NOT having a heart attack. Stop checking my heart and start looking at my goddamned gallbladder.]

Diagnosis: Yes, you have lots and lots of gallstones. Some of them measure as big as 16 mm in diameter. Having stones is not necessarily an issue, but it appears at least one of those stones have moved about. It/they could be stuck in the neck of your gallbladder (Cholecystitis), or it/they could be stuck in the Common Bile Duct (as my doc suggested) or they could even be stuck in your Pancreatic Duct. All of these conditions are very serious (and very painful), and you need an emergency procedure, known as an Endoscopic Retrograde Cholangiopancreatography (ERCP).

Unfortunately, you have the misfortune of needing this EMERGENCY procedure at the start of a holiday weekend. You’re in Canada, where our hospitals are government run, and non-essential employees are entitled to all government holidays. And since the ERCP needs to be done under x-ray, and since the x-ray staff is non-essential, they are off for the next FOUR DAYS (Good Friday through Easter Monday). The soonest we can see you is Tuesday April 7th.

But, before you leave, we need to warn you about a couple of severe complications that could occur before Tuesday. If you develop a fever, it could be a sign of pancreatitis, which is a potentially lethal condition. You must return to emergency immediately. Secondly, if you develop more severe pain in your back, that could also be a sign that your liver is enflamed. You must return to the ER at once.

And then he offered me pain killers. Percocets, Percodans, Oxycodan, whatever my heart desired.

I looked him in the eye and asked, but if I’m supposed to be on the lookout for an increase in pain, how will I know it’s there if the narcotics are masking it?

He didn’t have a good answer for me. So I declined the drugs.

The ensuing 4 days were hell.

I probably should have gone back to the ER at least twice, but I fought through it. Stupidly.

Tuesday morning I went in for my ERCP. Once out of sedation, the doctor explained that I really needed to get my gallbladder removed, but that the on-call surgeon that day ‘wasn’t feeling well, and preferred not to operate’.

Um, if he’s sick, WHY IS HE ON CALL. GO HOME SO THAT THEY CAN SEND AN ABLE-BODIED SURGEON IN FOR FUCK’S SAKE.

I knew what this meant. I had been forewarned by the ER doctor on Thursday. It meant that with the ERCP done, I was no longer in crisis, and would be relegated to the wait list for gallbladder surgery.

The doctor who performed the ERCP had inserted a stent into my bile duct to help the bile flow through should there be a delay in me getting the surgery.

The stint needs to come out in 3 months or less.

They repeated blood work, did a set of abdominal x-rays and  ignored me as I writhed in agony for 4.5 hours to finally advise me that it seems I have “mild pancreatitis”. My lypase count was 3,096; normal range is 23 – 300.

Because, yeah, that’s what happens when you LET THIS SHIT FESTER FOR DAYS ON END. 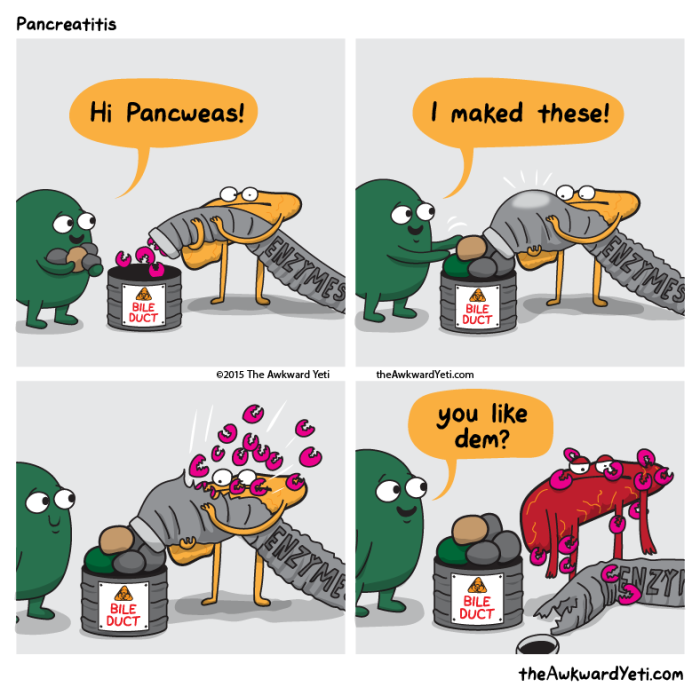 I looked at the ER doctor, so…this is the condition I was warned me about last Thursday – the one I was told I required me to be admitted to hospital. So, what now?

“Well, unfortunately we have no beds available tonight, so I could admit you, but you’d have to spend the night on a gurney, connected to a morphine-filled IV, in the hallway.”

I declined his generous offer.

He made me commit to return to the ER the following night to repeat my labs and ensure I hadn’t deteriorated. And he offered me a doggie bag of narcotics. Never haven taken any before, I nodded as he suggested percocet.

Wednesday I actually felt somewhat human again. The pain was manageable, so I never dipped into my party favors. I only went back to Emergency because he made me swear I would.

Another four hours of my life wasted that I can never get back. All to do a basic blood test. My labs had improved, he told me. They were still bad (lypase still > 600), but a vast improvement over the previous night.

The following morning I was scheduled for a repeat ultrasound at 9:30 am. A nauseating, blinding pain woke me up at 6:30. I took the first percocet of my life. A decision I would regret 2 hours later when I tried, without success, to walk, to talk, to stand, even. The trip to the hospital and ultrasound were a drug-hazed blur, and I was soon back in bed.

Several hours later, the effects of the percocet having dissipated, the pain continued to build. For the first time, after 10 days of pain, I found a level of pain that brought me to tears.

My husband drove me back to the ER (That’s 3 nights in a row for those of you keeping count.)

5 hours later, I was told NO, they would not operate on me because mine wasn’t a life-threatening condition. “But we could be doing a better job at pain management.”

No, how about you ADDRESS THE CAUSE OF MY PAIN instead of trying to mask it?

So, after telling him I didn’t want to go near percocet ever again, I got a shot of morphine in the ass, And I left with a prescription for 30 morphine tablets. That was last Thursday.

Finally, yesterday, 2 weeks from the start of this nightmare, and I finally got a consultation with the surgeon who will be removing my gallbladder.

Yes, you need to have it removed. That is not even a question. No, I can’t tell you exactly when. There is a bit of a wait.

I implored him to have a heart. To please help me get to resolution on this.

He reluctantly agreed to pencil me in for surgery, in the ER, when he’s on call a week Tuesday. It’s cheating the system.

But there is no guarantee it will happen.

If “real” emergencies show up that day, I will get bumped.

Still, hope springs eternal. And I truly believe that on April 21st I will get this fucker pulled from my body.

Because the alternative is unimaginable. 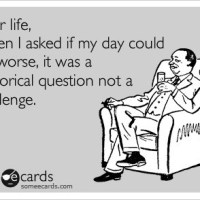