Strength training is important for many reasons, not the least of which is that by adding lean muscle mass you ramp up your body’s fat burning capability.

Seriously, who wouldn’t want this?

I understand, on an intellectual level, that adding muscle is the best way for me to boost my metabolism and turn my body into a fat burning machine. On an inexplicably emotional level though, I feel like I need to move really fast (i.e. run, do the elliptical, etc.) in order to feel like I’ve really worked out.

Last year, without a job, I had all the time in the world, and didn’t need to make a choice. I could do an hour of cardio and then do a bunch of weight training.  Now that I’m back among the working class, I no longer have 2+ hours to spend in a gym each day.

I’ve dabbled in some new forms of exercise [Pure Barre, anyone???], and have recently gotten reacquainted with the rowing machine. [Which, by the way, is a fantastic way to combine cardio and strength in one exercise. I highly recommend it for its efficiency alone.]

I’ll admit, however, that I have been largely focused on cardio training since the new year (and the new job). <– This despite everything I know about the importance of building muscle.

Yeah, way ahead of you; sometimes I question my own intelligence.

Anywho… if you’re still harbouring doubt about the whole add-muscle-to-get-fit thing, just go ahead and ask a really buff dude what he does for exercise. I’ll bet you a kajillion dollars that he replies, “I lift weights“. Then, just for fun, ask him what he does for cardio. I’m guessing he’ll say, “I lift them faster.”

Meatheads everywhere can’t be wrong, so on Friday I decided it was high time that I returned to my super-duper favourite class of all time, Les Mills’ BodyPump. It’s a group exercise class, centered on working out with free weights, primarily on a barbell.

I have raved about my love for BodyPump many times here on this blog. Don’t believe me? Just go to the little search box and type BodyPump and see how many posts come up. Go ahead, I dare you. 😉

When I did the class on Friday, I had already done 2 outdoor runs for my stupid 10k training earlier in the week, along with a host of other activities, like hours on the elliptical, and a train-to-do-100-push-ups program.

Oh, and did I mention that it had been over 3 months since my last BodyPump? No? That is a pretty key element to this little story.

In all my wisdom I believed that because I loved the class so much in the past, that I could seamlessly fall right back into the groove.

Never mind that I was attending class 3x/week back then.

Never mind that I was capable of lifting quite heavy back then (often as heavy or heavier than the instructor).

And never mind that each class features approximately 700 reps.

I disregarded all of those things and jumped right back in with both feet.

The DOMS (Delayed Onset Muscle Soreness) set in mere hours after the class. By Saturday morning I was an achy, sore mess.

I can totally relate.

Now I’m all for a good dose of the DOMS, as I wrote about here. I think I embrace the pain because it allows me to be all smug and shit, gloating in the knowledge that my ache was caused by total bad-ass gym behaviour.

But this was something different. This was the mother of all DOMS pain.

And it was primarily in my ass.

A giant pain in the ass.

BodyPump broke my ass. It hurt SO bad.

Since DOMS are not new to me, I knew that the following things would help to ease the pain:

Given that bullets 1-3 had done nothing to alleviate my pain, I decided to go out for a “light and easy” run at noon on Saturday.

It was approximately 32 degrees Fahrenheit/ 0 Celsius. And windy. And I was hella sore from my DOMS. And I had a broken ass.

But for some reason a “light and easy” run seemed a good idea.

There was nothing light, nor easy, about that run Saturday.

It did deliver one thing though: more severe DOMS.

Navigating up (or down) stairs proved to be an effort of monumental proportion. And using a toilet… GAWD! The pain! 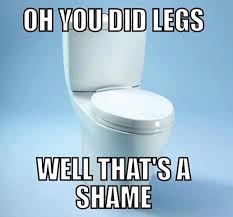 After slathering myself in a vat of rancid-smelling muscle cream and downing the better part of a bottle of wine, I managed to fall asleep. My ass pain only woke me up a couple of times.

I woke up older and wiser Sunday morning. I now know never to attempt a run during DOMS. It won’t help.